Vacuflex & Cupping during a Reflexology treatment.

During a typical reflexology session, Vacuflex therapy is used. Vacuflex is a treatment using both flexible felt boots into which the feet are placed,  and cupping with silicon cups along the acupuncture lines.  The boots are painless, but provide an intense form of Reflexology by increasing circulation and oxygen flow in the body.   The cups are placed on the acupunctre lines that run from the feet to the knees and from the hands to elbows. This treatment is similar to acupunctre, but without using needles.  In other words pain free acupuncture. A full manual foot reflexology treatment and foot massage is then also done by the therapist.

The first stage of  the treatment involves placing a patient’s feet in felt boots.  A vacuum causes the boots to constrict with gradual controlled pressure.  The patient feels a pleasurable, yet firm pressure over the feet, ankles and calves. Once the boots are removed, a “map of colours” is left on the reflexes of the feet for about 30 seconds.  These colours are a measure of the body’s thermal energy and help to assess areas of congestion due to body heat or the lack thereof.  As the body eliminates toxins, so the colour patterns change with each treatment. The pressure from the boots that is applied to the foot starts the elimination process of the Reflexology treatment by forcing blood, nutrients and oxygen to a congested area.  Back problems, low circulation in paraplegics and sports injuries including ankle sprains has been treated effectively with Vacuflex therapy.  It is also far more comfortable for those people who have a low pain threshold or who have intensely sensitive reflexes due to severe congestion in the body. 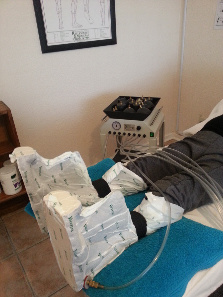 The second stage of the treatment is more similar to traditional cupping and involves the application of silicon suction cups to stimulate acupuncture points along the meridians.  The cups are placed on the arms and lower legs on both sides of the body simultaneously.  Pressure from the cups on an acupuncture point creates a vibration along the acupuncture pathway and disperses any toxic molecules that are sticking together and causing a blockage in the flow of energy.

The third stage of a treatment is a manual reflexology meridian treatment which involves the stimulation of energy pathways that end in the feet and of areas that have shown congestion after the boot treatment.

During the fourth and last stage the treatment is brought to a closure with a relaxing foot massage using herbal cream or aromatic oil.

A vacuflex session including the meridian treatment lasts for 60 minutes.

Vacuflex Concepts is very beneficial for the treatment of sports injuries such as a sprained ankle. The results are great and a severely swollen foot can be reduced to the extent that a shoe can be worn again within a week. The Vacuflex boot system can be compared to the approach of using a tight stocking to support the veins and lymphatic system after an operation to prevent clotting.  The boots force blood, nutrients and oxygen to the area of injury, allowing congestion from damaged tissue to be dispersed, resulting in repaired tissue and reduced swelling.