What are the origins of Reflexology?

Reflexology is believed to have originated in China 5,000 years ago.  The Chinese, in particular, developed the art of acupressure into an accepted and respected healing system.  The connection between Reflexology which uses reflex points and Acupressure which uses acupoints along the energy pathways or meridians in the body are very close.

The oldest recorded practice of Reflexology was depicted in a picture of two men working on the hands and feet of two other men.  This was found in the tomb of an Egyptian physician, Ankmahor, at Saqqara in Egypt.  The positions of the patients are different.  The patient on the left has his right hand on his right knee and his left hand under his right armpit.  The other patient is the opposite.  There is a relationship between the kind of problem the patient has and where the practitioner touches.  This determines the points of pressure he and the patient use.  In this case, the patient is touching the reflex point under his arm where he feels the corresponding pain.

Over the centuries Reflexology took a backward step, until the end of the 19th century when a Dr W. Fitzgerald, an American ear, nose and throat specialist, developed zone therapy.  He applied pressure to the zones corresponding to the location of the injury and not only relieved pain, but in the majority of cases, also relieved the underlying cause as well.  Through the knowledge he gained in research he began to use Reflexology and write books on it.  He worked with a Dr Edwin Bowers  and the two of them continued to develop zone therapy. 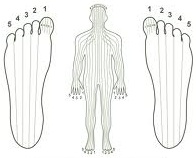 Their theories were not well received by the medical profession as a whole, but one doctor did believe them, a Dr Joseph Shelby Riley.  He was taught by Dr Fitzgerald the techniques of Reflexology and he used this method in his practice for many years.  Dr Riley’s assistant was Eunice Ingram (1879 – 1974) and in the 1930’s she expanded on his theory and for the first time mapped out the feet to show the reflex points.  She was the founder of modern Reflexology and when she retired in 1970, her niece and nephew Eusebia B Messenger and Dwight C Byers continued on with her good work. Today students are still taught by this method.

In 1960 Reflexology was introduced into the UK by Doreen Bayly, a student of Ingram.  Reflexology became recognized and more widely used, with doctors realizing that complementary therapies like Reflexology can assist in the healing process of conventional medicine.

In 1983 a Danish lady by the name of Inga Dougans immigrated to South Africa and set up a successful Reflexology practice in Durban.  Her technique acknowledges a strong link between acupuncture and reflexology. Both maintain that disease is caused by blockages in the meridians and treatment involves clearing out a blockage (SA Reflexology Society).  She later established the first International Academy of Reflexology & Meridian Therapy in major centers around South Africa and the world.  In February 2001 Therapeutic Reflexology became a recognized health profession under the Allied Health Professions Council of South Africa, allowing Therapeutic Reflexologists who have obtained the recognized training to apply for AHPCSA registration.

Although Reflexology is relatively new in the Western world, the future of health will evolve into prevention of disease and stress conditions rather than cure.  Good health depends on balance, equilibrium and natural functioning of all the body systems.  Reflexology achieves this by working on a physical, emotional and spiritual level.